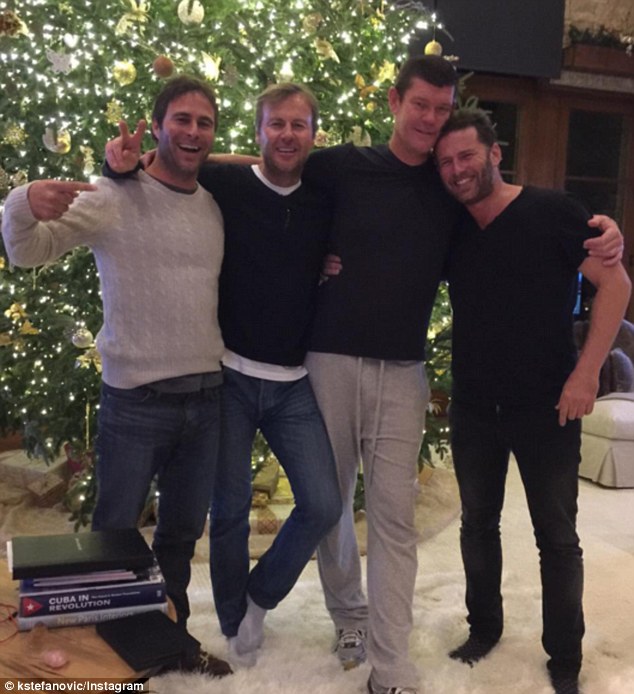 He’s made no secret of his battle to stay in shape, previously admitting to undergoing gastric band surgery in a bid to lose weight. And on Saturday James Packer appeared to have slimmed down even further following his gastric band surgery as he posed for a photograph with friends. The 48-year-old mogul showed off a remarkably thinner frame as he posed with Channel Nine presenter Karl Stefanovic before a Christmas tree. Wearing some grey sweatpants and a black polo shirt, the 48-year-old looked happy and relaxed as he settled into the holiday spirit. Next to him Stefanovic, 41, beamed for the camera for the snap he later posted on Instagram. The Today show veteran appears to be enjoying his break from work, showing off a full chin of stubble in the photograph. Captioning the image, Stefanovic wrote: ‘I just love time with family and the best of friends over Christmas. ‘It’s the most important thing in my life. Lots of love for the festive season everyone.’ The presenter announced on Saturday that he had finally signed a new contract with Channel Nine after weeks of negotiations. Packer previously admitted to resorting to gastric band surgery, claiming to have lost kg in 2011 after undergoing the procedure. He has since showed off a gradually decreasing waistline, with fans quick to applaud his efforts on social media. Instagram users responded in their droves to the photograph to commend the billionaire, with one writing: ‘Is that James Packer? How skinny is he!’. The businessman is understood to be in the U.S. after reuniting with girlfriend Mariah Carey earlier this week. The pair, who revealed their relationship earlier this year, met up in New York where she was performing a festive concert. Read the full Story in the Daily Mail OnLine: http://www.dailymail.co.uk/tvshowbiz/article-3366819/How-skinny-Fans-applaud-James-Packer-weight-loss-shows-remarkably-thinner-frame-Christmas-snap-Karl-Stefanovic.html#ixzz3xQb48mP6 Follow us: @MailOnline on Twitter | DailyMail on Facebook *“Results are not guaranteed and will vary from person to person“