For diabetes control, surgery and intensive lifestyle change about equal 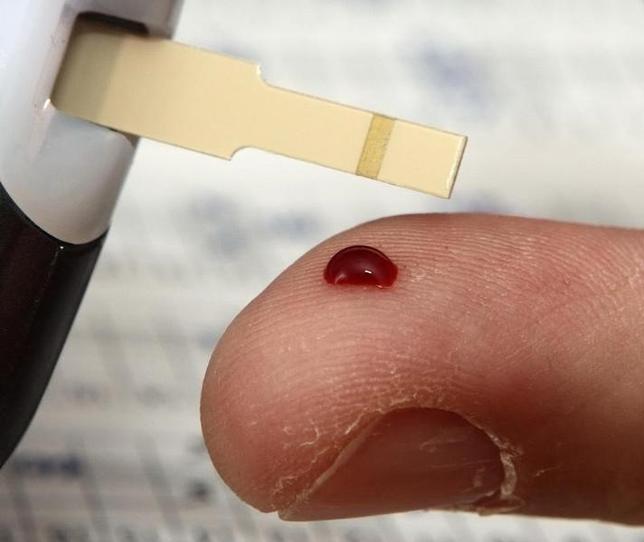 A diabetic tests his blood sugar level in Vienna November 13, 2012. Picture taken November 13.
Reuters/Heinz-Peter Bader
(Reuters Health) – Intensive medical management with supervised diet and exercise may work as well as weight-loss surgery to help diabetics get blood sugar levels under control, at least in the short term, a small study suggests.
Researchers followed 40 people with diabetes and poorly controlled blood sugar for one year, giving half of them weight-loss surgery and offering the other half a non-surgical alternative, so-called intensive medical management. Both options produced similar reductions in blood sugar.
“Individuals motivated to impact their health can have substantial diabetes and weight improvements,” said senior study author Dr. Allison Goldfine, a researcher at the Joslin Diabetes Center in Boston.
Worldwide, nearly one in 10 adults had diabetes in 2014, and the disease will be the seventh leading cause of death by 2030, according to the World Health Organization.
Most of these people have type 2 diabetes, which is associated with obesity and aging and happens when the body can’t properly use or make enough of the hormone insulin to convert blood sugar into energy. Left untreated, diabetes can lead to nerve damage, amputations, blindness, heart disease and strokes. While physicians have long recommended exercise, weight loss and a healthy diet to control blood pressure and minimize complications, in recent years a growing number of obese people with diabetes have been offered weight-loss surgery as an alternative way to shed pounds and get blood sugar under control. Goldfine and colleagues studied a type of weight-loss surgery known as laparoscopic adjustable gastric banding, a minimally invasive procedure that involves placing an adjustable inflatable belt around the upper portion of the stomach. The band can be made of silicone and tightened by adding saline. It effectively reduces the amount of food the stomach can hold, and people are advised to eat portions about the size of a shot glass post-surgery. The study team compared this surgical intervention to aggressive medical management by a team of specialists in endocrinology, diabetes education, exercise physiology, nutrition and behavioral health. These participants had two-hour weekly group sessions for three months as well as calorie-restricted meal plans and supervised exercise sessions. At the start of the study, participants were typically obese and about 51 years old. Many of them were taking medication to control blood sugar, lower cholesterol or treat hypertension. The main goal of the study was to see which treatment alternative was most effective at helping to lower hemoglobin A1c, a protein in red blood cells that gets coated with sugar over time, making it a gauge of average blood sugar levels in the past few months. After one year, six of 18 surgery patients (33 percent) and five of 22 non-surgical patients (23 percent) achieved the target A1c level below 6.5 percent, where diabetes is considered well-controlled. Within three months, seven people in each group lost at least 10 percent of their body weight, but after one year the surgical group achieved a greater weight loss than the participants in medical management. Because the study was so small, and only followed participants for a year, more research is needed to compare the long-term impact of these treatment options, the researchers acknowledge in the Journal of Clinical Endocrinology and Metabolism. “Success over one year is no guarantee of longer term success, regardless of the intervention,” Sheri Colberg, a professor of exercise science at Old Dominion University in Norfolk, Virginia, said by email. With both the gastric band surgery and diet and exercise, many people are unable to sustain weight loss over time, said Colberg, who wasn’t involved in the study. After two years, there should be a much more dramatic weight loss with surgery compared with diet and exercise, John Dixon, head of clinical obesity research at Baker IDI Heart and Diabetes Institute in Melbourne, Australia, said by email. People getting this surgery, if managed appropriately, can lose as much as 20 percent of their body weight by two years and keep it off, said Dixon, who wasn’t involved in the study. While the new report offers clear evidence that intensive lifestyle management can achieve improvements in diabetes after one year, this method may not work over the long term to reduce the risk of cardiovascular complications or deaths in patients with diabetes, Dixon said. There is, however, a growing body of evidence suggesting that surgery reduces mortality, he said. SOURCE: bit.ly/1DU6sZF Journal of Clinical Endocrinology and Metabolism, online April 24, 2015.
Read more…